The season is winding slowly down up on Mt. Cheeseman but there may still be a few weeks left in it yet.  New Zealand is known for its spring snow and for a good reason.  The weather is warm, the sun is out, and the snow is heavy but soft, and the skiing is phenomenal.  Today we have been taking turns covering each other and getting out for runs on the cream cheese-like snow.  Without too many customers around on the weekdays now we are making the most of our time.


Last weekend we celebrated the Mt. Cheeseman Undie 500.  A day where guests and staff are encouraged to dress in as little as possible and as creatively as they can.  This day includes a race down the mountain and because it was sponsored by Thermatec there was also a fantastic prize give away.  The staff was all over it this year and had quite a range of costumes.  I was super excited when they picked me as the costume winner and I was dubbed "2012 Mr. Undie 500" while wearing a Captain Planet costume I had made. 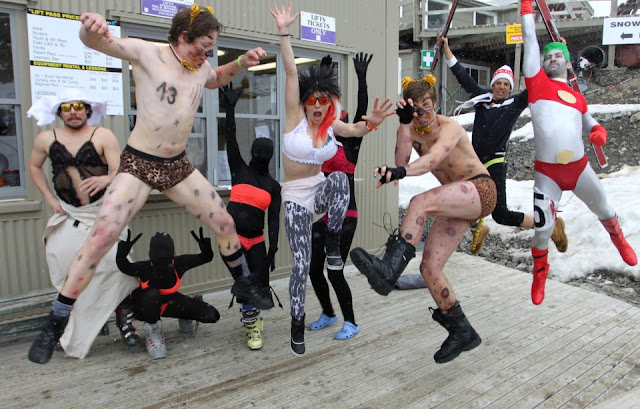 It was particularly cold day with sleet raining down on us as we booked it down the course in very little clothing.  Some dressed as wildcats, some as old women, some as super heroes and some as retro skiers.  One of our Swiss ski instructors, Fabio, made it down the mountain on a pair of skis from the 60's that are normally mounted on the wall in our lodge.  It was agreed that he was most likely the only person who could possible have finished a race on the pair of wooden sticks with ancient leather straps to hold his toes in place.  It was an impressive day to say the least and got everyone fired up.

Next upcoming event is Pirate Awareness Day on September 15th.