I recently passed the year anniversary of me departing from the US to engage upon this journey in the southern hemisphere.  From Chicago to Miami to Perth to Fox I have explored the land around me.  I have met now hundreds of amazing people and places.  Home truly is where the heart is an as long as I love what I do then my heart will stay with me... in this moment.  A year ago I celebrated my birthday with strangers who are now as old friends.  Yesterday I celebrated my 25th birthday with new friends and already lasting relationships.  The world is full, from top to bottom, with the most inspiring personalities.  We have only to go out and to meet them.  They are everywhere waiting to connect with us and to forge those bonds.  The land around us holds wonders that never cease if only we open eyes to new perspectives and life is good.  Take action for your happiness and make life happen.  It will not wait for you. 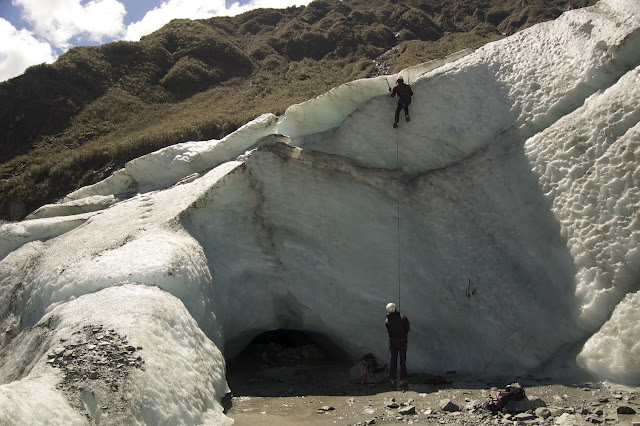 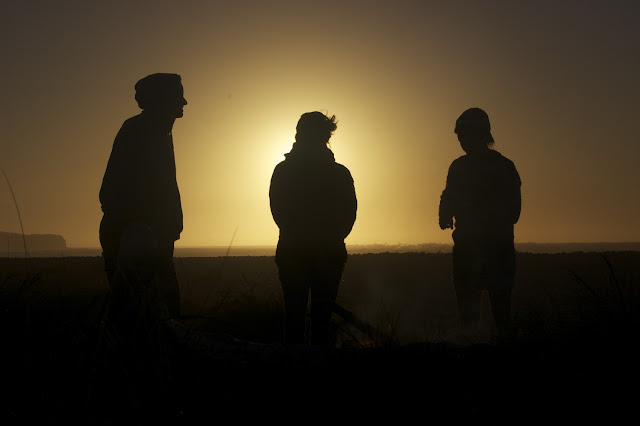 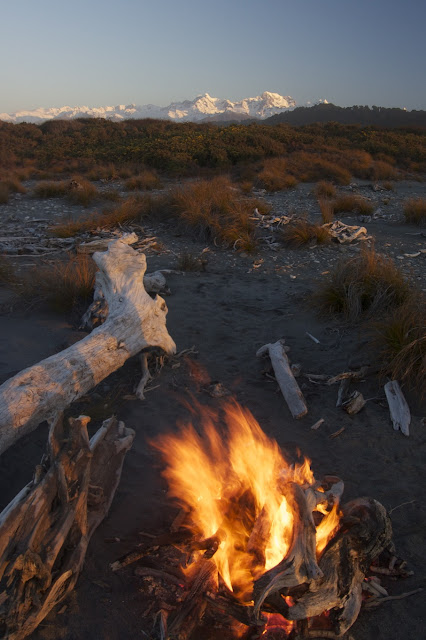 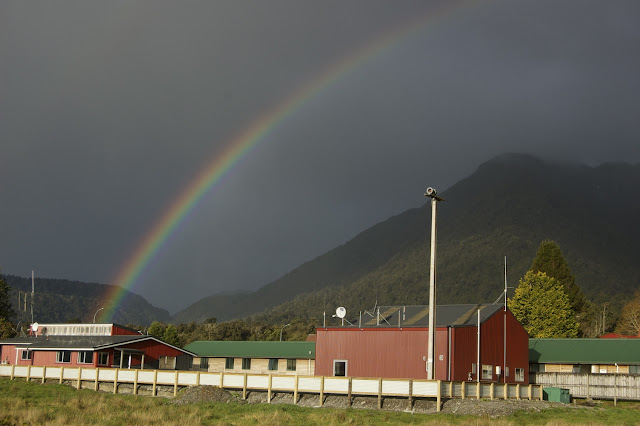 "ACTION is the foundational key to SUCCESS"
~Pablo Picasso~

Today I had my first day off and decided to go up the glacier anyway.  As guides we are allowed and even encouraged to go up and get familiar with our surroundings.  It is important to know the placement of hazardous crevasses and moulins.  It is amazing to watch this glacier change everyday.  The surface ice melts or ablates at an amazing rate.  Steps must be carved out of the ice every day or else they would completely disappear in just 3 days!  We strap on the crampons and go to work shaping, redirecting and  keeping safe all aspects of the glacier and all that effort is for only one of our trips.  You also have the option of flying up in a helicopter and seeing the upper portion of the 13 km long glacier, getting into the more wild areas with more freedom during the full day hike and then there is the ice climbing.  By the end of my 6 months working this season I should be qualified to lead all of our trips with the exception of the ice climbing.  For now I am happy and excited enough to be up on the ice and mucking about with my ice axe. 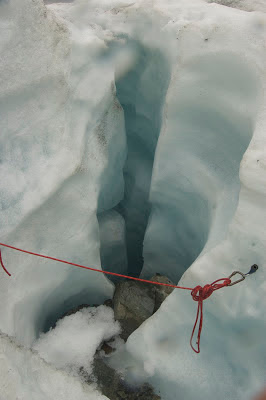 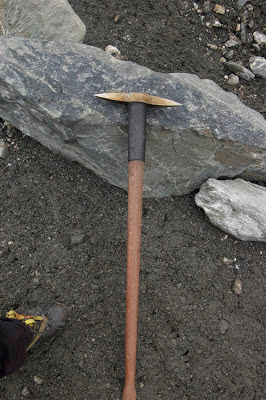 Posted by Tyler Roberts at 12:17 AM No comments:

Its been nothing but rain and cold since I have been Fox Glacier, save for one day.  On this day I got out and went for a walk along the beach.  There had been a gold mining rush here in the 1930's and I followed a trail along to see some of the bits left behind.  There is an old dredge now overgrown with plants and further along a tunnel dug through a mountain and exiting at a cliff face to the ocean for what purpose i have no idea.


This was one of the most beautiful walks I have yet been on in New Zealand.  Starting on the shore you move along behind wind sheltering plants with birds flitting about and the occasional sheep scurrying hurriedly across your path. After a nice stroll to the gold dredge and a short examination just in case they happened to leave any nuggets behind, the path turns onto the rocky shoreline itself.  Walking along here is the chance to find shells and a most beautiful array of rocks including the culturally significant Maori Greenstone.


Upon approaching a bluff you turn inland along a milky rivers edge and cross over via a small bridge. This takes you to my favorite part of the walk.  For the next 20 minutes you will walk through a lush rainforest with a thousand different plants all around.  Behind you can hear the waves crashing against the bluff but muffled and distant through the canopy with a soft constant chatter of birds all about.  How I had missed the sounds of birds when I was up above the trees at Mt. Cheeseman.


This is where you then come upon the tunnel, no more than 50 meters in length though the end is nothing but a bright light shining through. The tunnel seems as much a doorway to another world as a miners excavation.  Water drips over the openings like a beaded curtain and heightens that mystical sense of finding something so out of place and hidden. About what is at the end of the tunnel? I will leave that for you to come to New Zealand and discover it for yourself.


A fair hours trek through a wet sponge-like path after the tunnel you come again to the shore and to the the Galway Seal Colony far along past the bluff.  It lies along an ocean facing cliff with cascading waterfalls every 50 meters till you come upon the seals.  I crept up slowly and quietly hoping to get some candid shots of seals in action.  Of course they were all asleep, laying out and sunning on this gorgeous day.  As I moved closer and closer for a good shot of the nearest one I heard a rock just in front of me move about suddenly.  Of course it was a baby seal that was laying so still I hadn't noticed it.  It was not frightened, only curious, as it watched me.  It's mother however was not so trusting. She lie just behind the baby and let me know that she was not amused so I backed off but not before taking a few quick photos of the adorable pup.

My last weeks at Cheeseman were too short.  The snow was beautiful for the and of the season but with warming weather peoples minds turned back to the oceans and summer sports.  Suddenly we had too few customers to stay open and sights turned to cleaning up for the close.  Everyone became quite emotional at the end when we had to say goodbye to the many bonds that were forged on those slopes.

Now as I leave the snow behind me and look to the future I see ice up ahead.  A great wall of ice... or better yet, a river of ice flowing out of the those very mountains I have just come down from.  It starts up high with the snow falling in heaps.  As the days make their cycle this snow will melt and refreeze again and again compressing harder and harder together until it forms one great body moving all the way down to the valley floor with fingers reaching up to such great heights.  It is flanked by scree covered sloped that gradually take on vegetation as it descends until all around this glacier is a true rainforest.  I've mentioned this in an earlier post but feel as though i must reiterate the point that there are few places if any others that exist on our planet where you can find these two features living together side by side.

I begin at Fox Glacier Guiding on October 9th.  I am excited to begin and ready to learn all that I can about the glacier but for now I am busy exploring Milford Sound and up the west coast.  This is a great place if you are interested in the outdoors... and able to put up with the rain.  Living in Oregon has been great training for this type of environment and I am excited to become more familiar with the plants, birds and animals of the area.  And there are many; from Penguins to Keas, Cabbage Trees to Orchids, hedgehogs to bats.

During a few days in Milford Sound Kat, Kim and I had the chance to explore.  This is my second time  to this place and it is no less amazing.  It is actually quite deceiving because everything in the area is so grand and so magnificent that none of it appears to be at first.  Making your way around the Sound (actually technically a Fjord) the scale of it all becomes more apparent and slowly it sinks in how incredible this place is.  On a boat ride about the sound we saw dolphins bow-riding, waterfalls that flow upwards with the shear force of the wind blows through.  The next day we kayaked about, giving a more accurate sense of the grandeur.  The highlight of this excursion for me was when approached a beach to see 4 Fiordland Crested Penguins come out to greet us.  They bathed in the water and then all swam right past the boats porpoising as they went.  It was an lifting moment to witness from the endemic penguin. 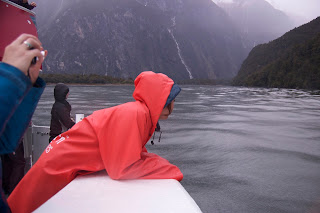 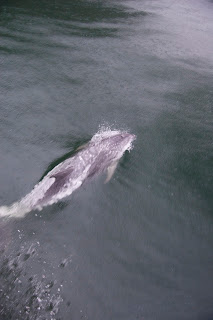 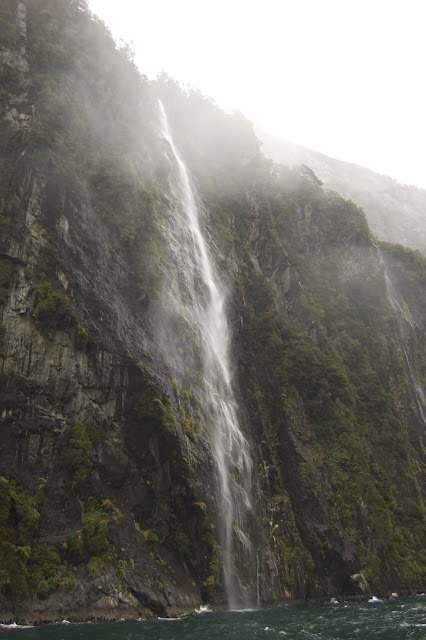 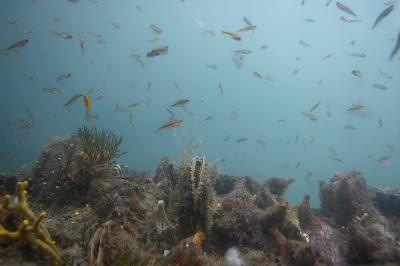 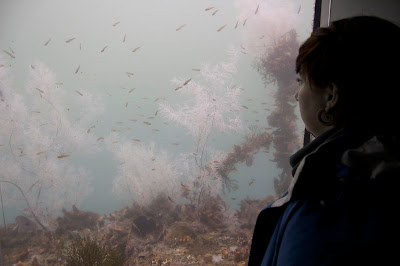 The water system in Milford Sound is extremely unique consisting of a freshwater layer saturated in tannins leached from the plants all around.  This gives the water a black appearance from the surface like tea but meters underwater you can find the saltwater layer which is home to some wild creatures.  Because of the dark top layer it is possible for many typically deepwater species to live at a very shallow depth here.  One of the more profound is huge black coral trees (actually white in appearance). I want so badly to SCUBA dive this wild and largely unseen place, but I will save that for later.For now I go back to Fox Glacier and to set up my new home. 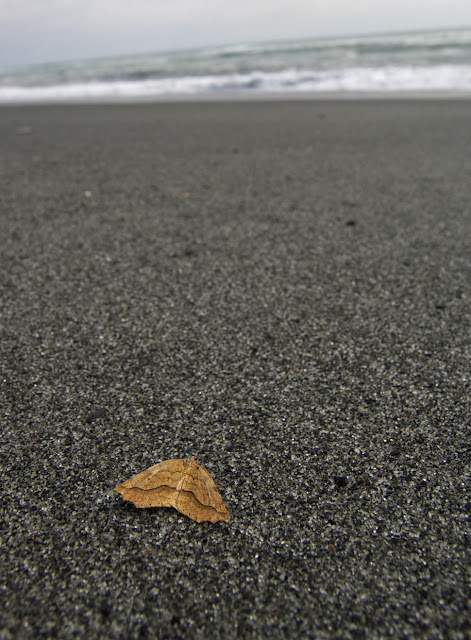 
Posted by Tyler Roberts at 6:48 PM No comments: