I have never considered my self a hardcore minimalist although i do like to try and keep things simple.  I despise overpacking but also follow a philosophy of preparedness, most likely a product of my time in the Boy Scouts that has served me well many times.  Every time I pack for an outing, adventure, or now jobs as well I must balance these two sides of myself.  On different occasions I am persuaded to lean one way or another depending on conditions.
For my trip to Kanuti NWR I damn near fell full into the gluttonous over-packer inside myself.  We were being dropped by planes and helicopters at every site so we weren't required to move the gear except from plane to site which was usually only 20 meters max.  We already had 2 large bins, 3 duffle bags, a shotgun, camp-stove, satellite phone, inflatable kayaks and lot of other required gear for the technical side of things.  I didn't feel as though I was adding too much weight to bring along my new little travel guitar, 5 books to read on the side plus 2 bird guides, a crazy creek, and a Hawaiian shirt... for the casual Hawaiian shirt Fridays of course!
Admittedly, I was a little disappointed at the prospect of not getting to do any backpacking in Alaska as I had carved out a rather romanticized image of the way things would be in the field.  I imagined the pristine overlook of the Alaskan backcountry from mountaintops with clear blue skies. Getting dropped in one spot with nothing but the gear on our backs and a point on the map to reach by a certain date for our pickup.  Back in "the good ole days" of field research they really did do it that way.
In reality we checked in with ABO daily over the satellite phone.  Now, in the technological age, the age of communication and constant connection, it is seen as an unnecessary risk to have a crew in the field without a way to get in contact immediately if need be.  We had around 400 lbs of gear and backpacking it between camps was out of the question, not to mention the terrain we would have had to cross.  Although one side of me wishes I could face those challenges and overcome the hardships they incurred, I do agree with the reasoning behind the communication.  Even with the satellite phone it will take a minimum of 8 hours for aid to reach you in the back country and in most cases much longer than that. 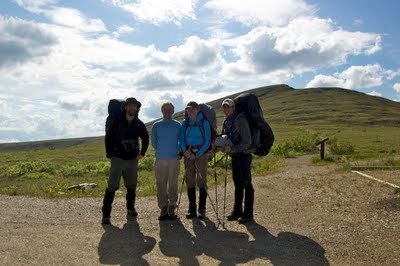 In the end I did get to go backpacking through the White Mountains which had as beautiful a view of the backcountry as I could have asked for.   When we returned after a month in the swamp and someone asked if we would go assist the other crew in the mountains I jumped at the chance.  It was only a few days but it was still great to get a change of scenery.  Hiking in with just our backpacks and the few essentials: satellite phone, data forms, binoculars, camera and the regular backpacking gear.  We even stayed in a shelter which eliminated the need for a tent.  The minimalist in me got to shine for those few days though i still had the nagging feeling that I was overdoing it with the gear, as the minimalist will forever tell me.  No shotguns here, they were too much weight to carry over 10 miles in.  We were relying solely on bear-spray this time which was just fine by me. 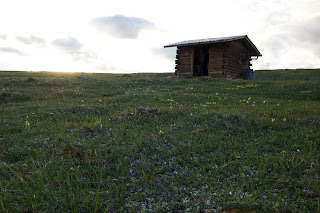 Posted by Tyler Roberts at 7:25 PM